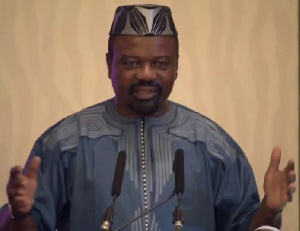 The Dean of the Ghana Armed Forces Command and Staff College, Prof. Vladimir Antwi Danso has warned European powers against imposing the rights of homosexuals on Ghana.

He cited an instance where he wanted to physically assault former UN Secretary-General, Ban Ki Moon for advocating the rights of homosexuals at a forum designed to address food insecurity in Africa.

The Dean also observed that he was incensed by the decision of the American Embassy to hoist the flag of homosexuals in the midst of a massive campaign against the rights of LGBTQ+ persons.

Prof. Antwi Danso challenged the Europeans to champion the rights of homosexuals in the Arab countries if they believe it is a human right issue.

He was speaking at an event to mark the UN International Day of Democracy on the theme, “The Role of State Actors and Civil Societies in Consolidating Democracy, Human Rights and Freedom.”

The Dean also bemoaned the spate of coups experienced on the Continent, a situation he blamed on the democracy deficit in Africa.

The President of the Republic, Nana Addo Dankwa Akufo Addo, says Ghana’s economy rebounding faster from the ravages of COVID-19 than envisioned, following a slow rate of growth in 2020.

Speaking at the maiden edition of the Presidential Business Support, on Tuesday, 14th September 2021, at the Kempinski Hotel, President Akufo Addo noted the support offered by the private sector, coupled with effective management of the COVID-19 crisis by Government, have seen the Ghanaian economy outperforming her peers, and rebounding faster than envisioned.

The Guinea situation, a wake-up call for African leaders – Agumenu