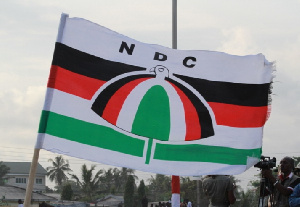 According to Onasis Kobby, the NDC is making in-roads in the region and counting on the region to swing to the party’s favour.

Speaking as a guest on UTV, Onasis Kobby, who is the Deputy Youth Organizer of the NDC in the Ashanti Region rebuffed claims that the youth in the region have rejected the party.

He said that the youth has rather bought into the policies of John Dramani Mahama and will demonstrate that trust in the 2024 election.

He assured the youth in the region that the John Mahama government will execute major projects and ensure that the ‘glory of Ashanti is restored’.

“NPP is sponsoring these fake stories in the media. If they’ve not lost hope, they wouldn’t be sponsoring these things in our strongholds. They are doing it in their stronghold because they’ve lost grounds. They’ve clearly lost grounds in Ashanti Region. My trust and hope in the youth of this region has heightened and I have absolute confidence in the youth of this region.

“The promise to the NPP is that the NDC will win the 2024 elections from the Ashanti Region. The Ashanti Region will be the battleground. Ashanti Region is going to prove a point and that point will manifest in the kind of projects that will pop up in the region.”

His reaction comes on the back of a statement from a group in the Ashanti Region that John Mahama rejected them hence their decision to pay back in 2024.

The group which claims to be an affiliate of the NDC recommended a new candidate to lead the party in 2024.

Ama Benyiwa-Doe is an embodiment of limitless courage – Mahama

Ironing vendors are common across India. The irons are heated using charcoal, a fuel that contributes to air pollution. But