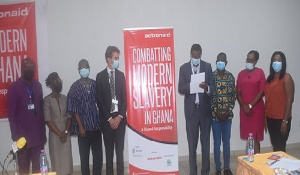 A three-year project to complement the government’s efforts at tackling modern slavery and indecent work practices within the agricultural sector of the country, was yesterday launched in Accra.

With funding from the Norwegian Agency for Development Cooperation, the project aims to enhance the knowledge of individuals and communities to court their support to prevent such practices.

Globally, it is estimated that 40 million people are caught up in modern slavery with 70 percent being women and children.

The Acting Country Director of ActionAid, John Nkaw, said the initiative had targeted agribusinesses within the food and cash crops such as cocoa and cashew value chain; relevant government agencies and the Africa Continental Free Trade Area, community leaders, smallholder farmers with at least 80 percent being women.

He said it formed part of the ActionAid’s aim of tackling the structural causes and manifestations of poverty and injustice, and also help Ghana achieve the United Nations (UN) Sustainable Development Goals (SDGs) Target 8.7.

The target, he said, required UN member countries to take immediate and effective measures to eradicate forced labour, end modern slavery and human trafficking, and by 2025 end child labour in all its forms.

He said human trafficking which was a component of Modern-day slavery, was one of the gravest human rights violations of the present age and a crime that caused enormous physical and physiological damage to victims and their families, undermined national cohesion, and eroded developmental gains.

“Human trafficking, child and forced labour and its related forms of practices persist in Ghana and addressing it must be achieved within a collaborative framework amongst the relevant agencies”, he said.

The General Secretary of GAWU, Edward Kareweh, said modern slavery was a product of poverty which was pervasive in the country because the country was saddled with “debt and issues of unemployment.”

He said the Union had joined forces with ActionAid to eradicate poverty and ensure that no one was subjected to inhumane practices because of their economic situation.

The Deputy Head of Mission of the Norwegian Embassy, Kyrre Holm, said the fight against modern slavery was a priority for his country because it would ensure the right to life and human dignity, education and in particular the right to freedom of movement.

A director at the Ministry of Food and Agriculture, Jeremiah Agyeman, declaring the government’s support for the project, said the ministry on its part, had put in place strategies aimed at addressing indecent work practices in the sector, including the Gender and Agricultural Development Strategy.