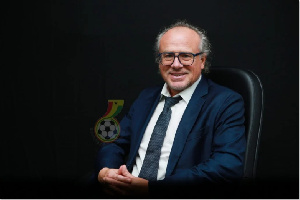 Bernhard Lippert, the current Technical Director of the Ghana Football Association is one of several coaches under consideration for the vacant Black Stars job, renowned journalist Jerome Otchere has revealed.

The former Kotoko Express Editor claimed in a JoyNews interview that Lippert is among the list of coaches being looked at by the three-member committee as Akonnor’s successor.

Jerome Otchere believes it will be a wrong move for the GFA to hand the job to the German trainer.

Jerome Otchere is of the view that Lippert lacks the competence to handle the Black Stars.

Jerome Otchere, however, urged that Ghana will not attain success if it does not invest properly in football.

“We need to be serious as a country. From everything the three of us have been saying, it paints the picture of a country that believes that we can do just anything and still get the kind of results that others who are serious are getting.

“Check the countries that have been in the last two or three World Cups and you’d know the calibre of coaches they have. They are not coaches who are owed 8 to 10 months salary and they are still on the job. They are not that kind of coaches. We seem to think that at that level, it is about hope and prayer.

“Everything we are doing doesn’t show that we are serious,” he added.

“If the coach comes in and he will not be given the freedom to work, we are going to come back to this position again because we still want to do things the way we like it and not like as others do it professionally,” he said.

A three-member committee led by Randy Abbey has been handed the responsibility of recruiting the next Ghana coach in three days.