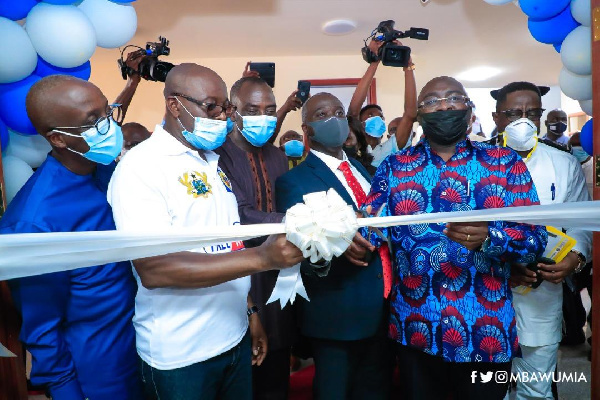 Dr. Clement Apaak, Member of Parliament for Builsa South and Deputy Ranking Member for Parliament’s Committee on Education, has alleged that the government has directed Colleges of Education to cough up close to GH¢7 million to the internet service provider, Busy Internet.

The amount is to be shared between 46 public Colleges of Education who were the party of the New Patriotic Party, NPP, government’s education digitization drive, a key plank of which was the free WiFi project captured in 2016 and 2020 manifestos of the party.

Apaak disagrees with the order for refund as contained in a letter dated July 23 which was signed by the Minister of Education and transmitted to the Director-General of the Ghana Tertiary Education Commission, GTEC.

According to the lawmaker, the said WiFi service never really reached most of these institutions because most of them already had arrangements for internet service and more so, that the said service provider, Busy Internet, hardly spent a day working on connectivity in any of the colleges.

Part of a lengthy writeup he posted on Facebook read as follows: “I hereby state emphatically … that there can not be any justification for the government through the Ministry of Education to direct GTEC to ask the 46 Colleges of Education to pay Busy Internet GH¢6.8 million (148,347 per College), pay for the installation for a supposedly free WiFi service which is yet to function and to take over payments for a non-functional free WiFi service.”

He has subsequently promised to push the government for accountability on the matter. “I intend to pursue this in addition to asking for accountability with regards to the policy to provide free WiFi services to all public educational institutions.

COLLEGES OF EDUCATION DO NOT OWE BUSY INTERNET GHC6.8 MILLION AND OUGHT NOT PAY FOR PROMISED FREE WIFI SERVICE WHICH HAS NEVER FUNCTIONED

This article has been necessitated by a letter written by the Minister for Education to the Director-General of Ghana Tertiary Education Commission (GETEC) in relation to the directive to Colleges of Education to pay GH¢6.8 million for “benefitting” from the government’s promise to provide free WiFi to public educational institutions.

Indeed, citizens expect that when political parties and their leaders make promises and get their mandate, such promises are given effect. Before I expose in more detail what now looks more like a campaign fraud rather than a campaign promise, it is important to present what the Akufo-Addo/Bawumia campaign team said in their 2016 and 2020 Manifestos regarding free WiFi to public educational institutions.

On page 32 of the NPP 2016 Manifesto, it states; In collaboration with the private sector, provide free WiFi coverage for senior secondary and tertiary institutions nationwide dedicated to learning, administration and enhancing the capacity to do research.

The same promise was repeated in the 2020 NPP Manifesto. On page 57, item 118 of the 2020 Manifesto, two columns are provided with the headings “promises and what we have done so far”.

Here is what is captured, “Collaborate with the private sector to provide free WiFi coverage to senior secondary schools and tertiary institutions; Contract awarded to provide free Wi-Fi connectivity to all 722 SHSs, 46 Colleges of Education, 16 Regional Offices, and 260 District Education Offices”.

The Vice President, the proclaimed arrowhead of government’s digitalisation efforts, on several occasions made reference to the promises (2016/2020) to provide free WiFi service to academic institutions.

In fact Dr. Bawumia is on record to have noted the following, “We promised free Wi-Fi and we are going to deliver…The program is going to kick off this year.”

Dr. Bawumia said this at the government’s 2020 town hall meeting held in the Ashanti Regional capital, Kumasi in September 2020. Below are further pronouncements by Dr. Bawumia on the provision of free WiFi to public educational institutions.

On September 29th 2020, Dr. Bawumia announced that over 80% of SHSs, Teacher Colleges were connected to free Wi-Fi. He made this known when he inaugurated a Library and an ICT centre at Abossey Okai as part of his tour of the Greater Accra Region. He added that all schools, universities, colleges of education as well as district education offices will be connected to free Wi-Fi by next year (2021).

He was emphatic when he said “We have understood the importance of digitization in the development of this country and especially in the education sector and so the President tasked the ministers responsible for education and communication to make sure all our Senior High Schools, as well as all the 46 colleges of education, are all connected to the internet (Wi-Fi) ..this has been started, and I am happy to report that so far 80 percent of all our Senior High Schools have now been given free Wi-Fi. It’s a major investment and in addition, all the 46 colleges of education also have the same. I think it will be launched soon.”

Again, in a Daily Graphic story written by Chris Nunoo, dated 21st November 2020 under the headline “Govt rolls out WiFi project – public institutions connected”, the Vice President is reported to have tested WiFi equipment at the new facility at the new campus of the GIJ at North Dzorwulu in Accra.

Bawumia who inaugurated the facility is quoted in the story to have said “the success of the pilot programme would lead to the extension of the system to other institutions including Technical Universities, Colleges of Education and Nursing Training Colleges”.

Mr. Bawumia continued, “work to extend the WiFi to senior high schools, all 46 Colleges of Education and District Education Offices are ongoing through the collaborative effort of Dr. Matthew Opoku Prempeh, and the Minister of Communications, Mrs Ursula Owusu-Ekuful”

Having given an extensive background I now bring to the public attention a difficulty to justify directive to the 46 Colleges of Education to pay Busy Internet, an internet service provider, GH¢6.8 million for the provision of internet services supposed to be free as promised by the NPP in both its 2016 and its 2020 Manifestos.

Even more intriguing is the established fact that the said free WiFi service the Colleges of Education are being asked to pay for has not functioned since installation.

As a matter of fact, even before the provision of the so-called free, non-functional WiFi service, the Colleges had their own arrangements in place to satisfy their internet needs. Colleges have, through their own resources, paid and continue to pay for their internet as I write.

For the avoidance of doubt, it’s important to share the full contents of the letter directing the colleges to pay Busy Internet GH¢6.8 million for a supposedly free and yet to function WiFi service.

The letter is dated 23rd July 2021, signed by the Hon. Minister for Education, Dr. Yaw Osei Adutwum, and addressed to the Director-General, Ghana Tertiary Education Commission (GETEC). The heading of the letter is “Notification Of Changes In Payment Of The Contract Price Of Busy Internet WiFi Provision And The Monthly Recurring Cost To Colleges of Education” (see attached). The content of the letter received by GTEC on August 12, 2021, is as follows.

“Upon a review of the contract for the provision of Internet Service to pre-tertiary schools, we noticed that Colleges of Education were also benefitting from the facility, meanwhile the cost is being borne by Free SHS.

“This has overburdened the funding of Free SHS. In order to free the Free SHS allocation, we have taken the following decisions:

1) Colleges that have already benefitted from the Busy Internet service provision will refund the initial cost of installation paid back to Free SHS;

2) Busy Internet will be instructed to start billing the Colleges of Education directly;

3) The original cost of GH¢6,824,000.00 paid for the 46 Colleges will be shared for the Colleges to pay. The Director-General, GTEC, is by this letter directed to inform the colleges of Education about this decision. Counting on your usual cooperation” (see letter attached).

Based on the foregoing, and privileged information available to me, I hereby state emphatically on the specific points listed below that there can not be any justification for government through the Ministry of Education to direct GTEC to ask the 46 Colleges of Education to pay Busy Internet ghc 6.8 million (148,347 per College), pay for the installation for a supposedly free WiFi service which is yet to function, and to takeover payments for a none functional free WiFi service:

a) No MoUs were signed between the Colleges and Busy Internet, the Internet provider;

b) No official discussion was held with Principals of the Colleges of Education nor their National Executives on what the provision of free Wi-Fi connectivity provided via Busy Internet entailed;

c) Even GTEC was not aware of the facility and the terms of agreement for the provision of the free WiFi;

e) Internet provider (Busy Internet) installed the equipment in the Colleges regimentally, the technical teams arrived on campuses without notification. They claimed they were directed to install the facility and threatened to go back if Colleges were not prepared;

f) No official letter was received by Colleges on the installation, operation and the terms of the internet service;

g) The only official letter the Colleges have seen mentioning Busy Internet service is the one by the Minister (see attached) announcing a decision to bill all Colleges that supposedly benefitted from free WiFi service to public educational institutions;

h) The facility, WiFi by Busy Internet, never worked for even a day in the Colleges till date.

It is useful restating a few issues and asking a few questions. Clearly, the Colleges of Education are included in public educational institutions identified to enjoy free WiFi as promised by the Akufo-Addo/Bawumia NPP government.

So, a) Why have these institutions been asked to pay for the installation and use of the WiFi services they have not used;

b) Where does government expect the Colleges of Education to get the money from to pay for a free service they never used;

c) Will students be billed to pay for a free WiFi service that they have not used;

d) Why should Colleges of Education and likely, students be billed to pay for a free WiFi which is not functioning going forward;

e) Given the narrative, why should government not be held liable and accountable instead of the Colleges, and likely the students?

Providing free WiFi to public Senior Secondary Schools and Universities, and asking public Colleges of Education to pay for same WiFi, which they have sadly not used raises many questions.

I restate, the 46 Colleges of Education do not owe Busy Internet GH¢6,824,000.00 and ought not pay for promised free WiFi service which has never functioned.

I intend to pursue this in addition to asking for accountability with regards to the policy to provide free WiFi services to all public educational institutions.