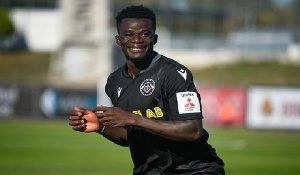 Ghanaian forward Malik Abubakari climbed off the bench to play the final 30 minutes of the match between Malmo and Juventus in the UEFA Champions League Group H opener.

A first-half rampage by the Old Ladies condemned the hosts to a 3-0 defeat in front of their fans at the Eleda Stadion.

Juventus opened the scoring after 23 minutes through wing-back Alex Sandro, before two quickfire goals right at the stroke of halftime put the game beyond Malmo.

Paulo Dybala scored from the spot before Alvaro Morata added his a minute later.

Malik Abubakari replaced Veljko Birmacevic in the 59th minute as the Swedish giants held their fourth and created chances but could not just get a consolation.

The Ghanaian attacker joined Malmo in the summer transfer window from Moreirense.

He has scored two goals in seven Swedish Allsvenskan games.