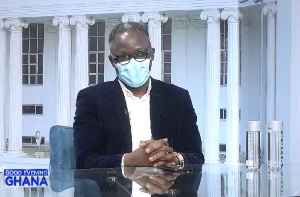 Legal Practitioner and Journalist with the Multimedia Group Samson Lardy Anyenini has spoken for the first time about calls on him to contest for the Bolga East Parliamentary seat.

According to him, there have been calls on him to contest from both sides of the political divides.

However, he has no intentions of joining partisan politics and will therefore continue to serve the country in different capacities.

The lawyer was speaking on Bolgatanga-based A1 Radio when he made this known.

Samson said “I get people calling me often from home and it is that they need me to come and contest elections and it’s been that for so many years.

“In fact at the political leadership; at the level of both parties, I have had approaches made to me that look; we think you are a worthy ambassador of the region where you come from, so we could help you to go and get a seat and I tell them I can serve my people and serve my country without getting into partisan politics,” he said on A1 Radio’s Daybreak Upper East programme”.