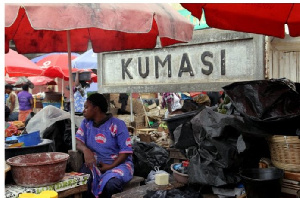 Traders numbering over 1,000 on Wednesday, September 15, defied all Covid-19 protocols and demonstrated at the Racecourse Market in Kumasi, Ashanti Region.

It was to register their displeasure over what they describe as a poor relocation plan.

The angry traders, clad in red arm and headbands and chanting war songs, are calling for the metropolitan authority’s head for demolishing the Kejetia Market without a proper relocation plan for them.

Some of the traders who spoke on Akoma FM’s current affairs and political show GhanAkoma explained that “we have now understood that city authorities do not think about we the traders, we are not against the development of Phase II of the Kejetia Market, but the right things must be done”.

Another woman who spoke in an angry tone bemoaned that “Osei Assibey Antwi, the Mayor, has failed Asanteman. We, the displaced traders, were supposed to have been given a better interim space to trade while we await the second phase of the market, but now, we have been ignored, so we want to use your medium to let President Akufo-Addo understand that his appointees in the region have failed him”.

President Akufo-Addo, together with Otumfuo Osei Tutu II, in 2019, cut sod for the construction of the second phase of the Kejetia Market.

The edifice, which was expected to be completed in 36 months, delayed for over two years due to the slow pace in relocating the traders to make way for Phase 2 of the project.

The €248 million project is being financed by the Bank of Germany and constructed by Messrs Contracta Construction Company of the United Kingdom (UK).

In the first week of September this year, the Ashanti Region Security Council (REGSEC) gave traders a week’s ultimatum to evacuate the area to make way for the contractors to commence demolishing and subsequent development.

Though the traders took the directive in bad taste, they agreed to move.

However, they are not happy with the relocation plans since the sod-cutting ceremony three years ago.

The angry traders say they don’t care about contracting Covid-19, without any nose masks not to talk of social distancing; they trooped in their numbers to Racecourse Market to demand space in any satellite market within the metropolis to trade.