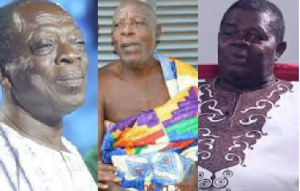 Kohwe, the late Super OD and Psalm Adjeteyfio also known as ‘TT’ have all benefited from politicians

• These individuals received support from some government officials

• Some of them were faced with deteriorating health conditions

• The officials either donated cash or food items to these individuals

In recent times, some ailing and deprived veteran actors have received help from government officials to ease their condition.

It has been the case that most of these actors, after entertaining Ghanaians all their lives, retire with nothing and in some instances suffer all kinds of chronic diseases.

Their deteriorating conditions were captured and circulated in the media space and this somewhat prompted the attention of some government officials to extend a hand of support.

In some cases however, these donations were done to support these veterans and show them love even though they may not have been in deteriorating situations.

We take a look in this piece, at some of these Ghanaian veterans whose condition called for government attention

This comes after the Taxi Driver TV series actor, in a viral interview, appealed for ¢3,000 to enable him to pay his rent or risk being evicted.

The renowned veteran actor who is currently on retirement revealed that after years of his acting, he has nothing to show for it and now survives on the benevolence of others.

Former President John Dramani Mahama sometime in 2016 donated some items like foodstuff and cash to veterans in the Ghanaian music and film industry.

Mr Mahama who was the then-president revealed that the initiative was intended to help these veterans.

One can recall that Mahama said the initiative was part of his dream to see to a better welfare of veterans in the Ghanaian music and movie industry.

Some of the veterans that benefited from the cash and foodstuff donations included Super OD, Mc Jordan Amartey , AB Crenstil, Mr Mensah, Kohwe, Odompo, JA Adofo, CK Man, Grace Nortey and so on.

The donations, according to the sector Minister was intended to ease the stress of some of these persons while they adhered to government’s lockdown directives at that time.

I staked bet to record my first song – Kweku Flick