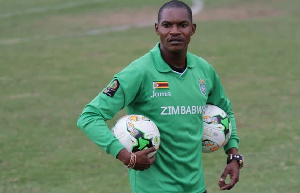 Mapeza who is currently the head coach of FC Platinum is replacing Croatian trainer Zdravko Logarusic who was sacked following their defeat to Ethiopia in the World Cup qualifiers.

The ex-Zimbabwe international player will be in charge of the Warriors for the remainder of the World Cup qualifying matches.

Mapeza will lead the Warriors for the very first time against Ghana in a doubleheader next month.

The 49-year-old tactician has previously handled the Zimbabwe national team as a caretaker coach from September 2010 to October 2010.

He was also appointed the head coach of the Warriors substantively from March 2011 to February 2012.

In between, Mapeza was assistant manager of Zimbabwe from July 2010 to March 2011 under Tom Saintfiet.

The former Galatasaray player has also been in charge of Monomatapa United, Chippa United and CAPS United.

Mapeza will be given the nod to lead the Warriors to the 2021 Africa Cup of Nations in Cameroon next January if he impresses during his interim period as head coach.

Frank Acheampong excels in Shenzhen big away win over Cangzhou