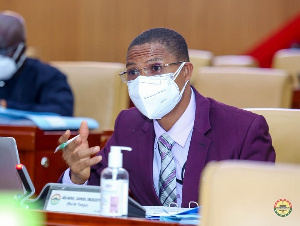 Member of Parliament for Madina, Lawyer Xavier Francis Sosu, has said that the Western type of democracy which has been adopted in Africa has failed to ensure the development of the continent.

Delivering the welcome address on the occasion of the United Nation’s International Day of Democracy on Wednesday, September 15, 2021, at Parliament House, the MP underscored the necessity for Africa to develop its own version of democratic governance.

“Democracy in my view remains the best system of governance for societies and organisations around the world, particularly because democracy allows for diversity, tolerance and openness to change.

“However, democracy as it is currently practised in Africa, does not provide solutions to the complex myriad of problems faced by African societies. The Western type of democracy has failed to develop Africa and its people. As such, it is time for Africa to begin to rethink and take advantage of the values of democracy as are generally known, but necessary to develop a new African Democracy,” Lawyer Sosu said.

He underscored that the current type of democracy practised in Africa has largely failed because it is founded on tenets that only benefit a few elite class.

“Currently, the democracy practised by most African countries seems to be largely founded on greed and selfish quest for power, fame and riches by a few elite class to the exclusion of the vast majority who are wallowing in poverty, unemployment, unplanned cities, and lack of access to basic social amenities. The use of shambolic elections and systemic manipulation to often change term limits of selfish and power-drunk leaders in their national constitution and twist the will of the people in order to hold on to power has gradually become a reality and constant feature of democratic governance in Africa today,” he said.

He further stated that the situation has led to the current development of serious security threats and general threats to peace on the continent. He cited events in Guinea, Burkina Faso and Togo to back his assertion.

He however expressed hope that such events will serve as a drive to “rally and remind us of our core pledge and solemn responsibility to achieve an inclusive and new African Democracy that guarantees respect for individual rights and freedoms and safeguards national, sub-regional, regional and global peace.”

MIIF Board: Professor Douglas Boateng to Chair US$200 million fund

Kudus was badly affected by injury against Liverpool – Ajax coach