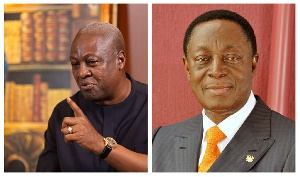 The former National Organizer of the opposition National Democratic Congress (NDC) Yaw Boateng Gyan, has given an indication that former Finance Minister, Dr. Kwabena Duffour will be contesting the party’s flagbearship race for the 2024 elections.

Dr. Duffour appears to be the only aspirant who will be joining the race to contest former President John Dramani Mahama in the next NDC presidential primaries, with massive support from NDC cadres.

After reacting to a publication by the Daily Post newspaper, on Okay FM’s Adeakye Abia morning show with Kwame Nkrumah Tikasie on Wednesday, September, 15, 2021, Yaw Boateng Gyan seized the opportunity to declare his support for the former Finance Minister.

According to him, he would be happy beyond description and solidly support him, if Duffour expresses his intention to contest.

“Kwame, I would be extremely happy if Dr. Duffour decides to contest as flagbearer of the NDC. I would support him wholeheartedly. If Dr. Duffour opens his mouth to declare his intent today, I would lead his campaign,” he categorically stated.

He further stated that another reason to support Duffour to lead the NDC in the 2024 elections is because of sponsored publication against him.

“I am now coming to the realization that John Mahama indeed sponsored Kofi Adams against me. At first, I thought it wasn’t true but now I have come to that realization. Mahama sponsored candidates against me.

“Nobody can dismiss me from the party. We gave birth to the NDC. These intimidatory tactics will not work on me. If I am anti-JM, what is wrong with it? Is JM holier than thou?” Wofa Boateng Gyan, a cadre asked.

After the Okay Fm interview, Mr Boateng Gyan, moved to Neat Fm, a sister station of the Despite Media, where he lambasted Mahama for selecting a political neophyte, Naana Jane Opoku Agyeman as running mate for the 2020 polls.

He said John Mahama running mate brought nothing in terms of fortunes to the party.

In Yaw Boateng Gyan noted that Naana Jane Opoku Agyeman was a monumental failure as running mate, losing the Central region votes to the NPP.

“The decision to make Naana Jane Opoku Agyeman as our running mate was a very poor decision. She was a bad choice. She added nothing to our fortunes. I would say she was a monumental flop as running mate to President John Mahama” he stated.

Yaw Boateng Gyan emphasized that some of them were rooting for Dr. Kwabena Duffour as the party’s running mate but for some strange reasons, politically naive Naana Opoku Agyeman was settled on by Mr. Mahama.

The former National Organizer was responding to a malicious publication by Daily Post, sponsored by Mahama in which Mr. Boateng Gyan was described as anti-John Mahama following his public support for Dr. Duffour to lead the NDC for the 2024 elections.

“We shall not be intimidated by Dokosi (Daily Post editor) and his people with this anti-John Mahama tag. It is a democratic party and we all have the right to support whoever we deem fit.

“Even Rawlings who founded the NDC is no more, his wife, Nana Konadu Agyemang Rawlings has also parted ways with this party. These things must stop. I would not be intimidated by such publications,” he lamented.

Your comments were reckless and insensitive – Amaliba slams Eugene Arhin

WAEC closely monitoring these schools over tip offs to cheat