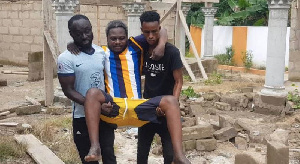 Fiifi Garbin who appears to have been struck with an unknown illness was seen in the company of two men who carried him and transported him into a car.

Sources say a traditional priest revealed that the movie director is currently under an evil spell (juju). He is unable to move his legs which seem swollen.

According to reports, he is currently undergoing treatment at the Dr. Kodua Spiritual and Herbal Centre in Kumasi.

Frank Fiifi Gharbin is an award-winning film director who has starred and produced several Ghanaian movies.

One can recall that some Kumawood actors including Papa Kumasi, Kwaku Manu and Frank Naro have lamented the influx of black magic in the movie industry.

None of us is perfect; respect our privacy – Nigeria’s 2Baba on his marriage crisis

Joeboy hints of venturing into the acting space