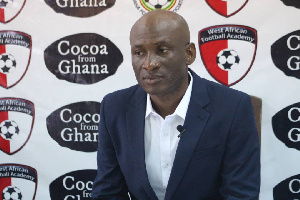 The Ghanaian tactician has become one of the most highly-rated coaches in the country especially after his exploits in the 2020/2021 Ghana Premier League season.

In that league campaign, he guided WAFA SC to finish 3rd on the Ghana Premier League standings at the end of the season.

With the Ghana FA keen on naming a local coach as the assistant for an incoming head coach for the national team, sources say the name of Prosper Narteh Ogum has been mentioned.

However, he is not the only local coach being considered. There is also former Asante Kotoko head coach Maxwell Konadu and ex-Black Stars deputy coach Ibrahim Tanko.

One or two of these coaches will be appointed to deputize the new head coach of the Black Stars.