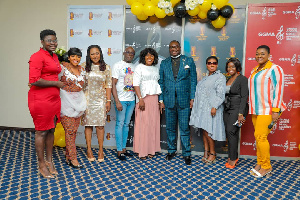 ASKOF Productions Limited has launched the maiden edition of an awards scheme themed Ghana Gospel Music Awards USA (GGMA-USA) at a colourful ceremony at the Sunlodge Hotel in Accra.

The launch of the event was graced by a number of celebrated gospel music icons, the media and individuals as well as sponsors of the awards.

Some of the gospel artists who graced the ceremony included Joyce Blessing, Jayana, SP Kofi Sarpong, Abena Ophelia, Rose Adjei and a host of others.

It is being arranged by Lightway Church Of God In Christ (LCGC) in California, USA in partnership with ASKOF Productions Limited and supported by Starnewsgh.com and Beatwaves Production.

Speaking at the ceremony, Pastor Daniel Yeboah of LCGC and founder of the awards scheme said the maiden edition of the event is expected to be held in April in the USA at a venue to be announced later.

According to him, the event is meant to promote excellence and give recognition to artists in the gospel music industry both in Ghana, the USA and others in Europe, Australia, Asia, Middle East and Africa.

He pointed out that, it is also meant to create a platform that will facilitate a smooth working relationship between Ghanaian gospel artists and their counterparts in the USA and other parts of the world in a manner of collaborations.

He noted that the reality show sought to create a platform for upcoming artists to launch their gospel music careers and also link them to resources that include efficient production teams to work with.

The renowned man of God added that the reality show will also create opportunities for music tutors who will help the artiste push their skills.

He revealed that the first three winners will receive recording contracts, special cash prizes among others.