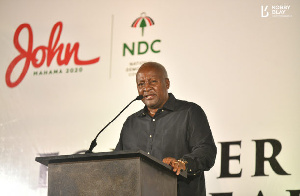 John Dramani Mahama has hurled verbal attacks at the government’s economic team, referring to them as ‘hypocrites.’

The 2020 flagbearer of the National Democratic Congress (NDC) explained that it is laughable that the NPP who rode on the back of the campaign that people should rubbish his government’s economic performance in 2016, now preach statistics.

“Our people are galled by the hypocrisy of so-called economic experts, asking them in 2016 to forget about economic statistics and look at the escalation of prices of cement & other products on the market, and then today hearing the same experts in gov’t hold-up statistics, inflation etc., and say that life is better for them,” he wrote in a tweet.

The former president added that it is interesting too that the same people preach the message that the current hardships in the country are his creation.

“And that the perception of hardship in Ghana is a creation of Mahama,” he wrote.

Our people are galled by the hypocrisy of so-called economic experts, asking them in 2016 to forget about economic statistics and look at the escalation of prices of cement & other products on the market, and then today hearing the same experts in gov’t hold-up statistics..,1/2 pic.twitter.com/855bPheRMA

Recently, both the NDC and the governing New Patriotic Party (NPP) have each been touting what they say are their economic performances over one another, putting out figures to support these claims.

During ‘The State of Ghana’s Economy, The Score card’, organized by the National Democratic Congress’s The Professionals Forum (PROFORUM) in Accra, John Mahama has stated that while there is no doubt that the world has been harshly hit by the pandemic, in the particular instance of Ghana, the government has further depleted the resources of the country, using it as an excuse.

Describing their excuse as a “convenient whipping boy,” the former president explained that, it is the reason Ghana currently has its largest ever budget deficit.

“COVID-19 has become the convenient whipping boy and has been cited as the reason for the crisis we face now and the attendant economic hardships. Yes, COVID-19 affected the economy, and no one can dispute that. It is however not the main reason why we are in the current hole we find ourselves. COVID-19 only became a pretext for reckless election-related spending, which produced the largest ever budget deficit in the recent economic history of Ghana last year,” he explained in a statement.

The NPP’s General Secretary, John Boadu, had also said that his party has a much better record than the National Democratic Congress (NDC).

He said they do not even compare themselves with the NDC because, in his view, the largest opposition party does not have any credible record to compare them with.

“The 4th Republic is more mature than mere slogans. The good voters of Ghana expect concrete actions from politicians. That is what the NPP is showing with consistency.

“The 2024 shall be fought and won on records, and not who can insult his opponent the most. No amount of political mudslinging and fact twisting can change the fact of the incompetence of John Mahama and his cohorts.

“We are focused on building a Ghana of opportunities and prosperity for all, and Isha Allahu, we shall get there,” he said at a press conference in Accra on Thursday, August 26.

#KwameNkrumahMemorialDay: Here are some famous quotes by Nkrumah