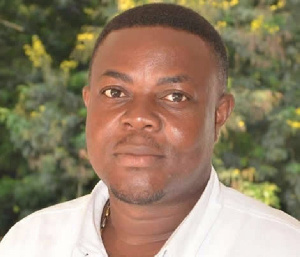 Deputy national communication officer for the opposition National Democratic Congress, Godwin Ako Gunn has disclosed that Ghanaians are not fed up with the former president, Mr John Mahama leading the NDC again.

He believes the 2020 flagbearer of the party has marketed himself very well and looks good in the eyes of Ghanaians who want to experience good governance again in the country.

Speaking to Kwame Minkah on TV XYZ, Gunn, who followed Mr. Mahama to tour parts of the country in the north and the middle belt recently, stated that Ghanaians were expecting the former president to lead the NDC into election 2024.

“People will be very disappointed if H.E John Dramani Mahama decides not to contest again in the NDC flagbearership race,” Gunn said while making a strong case for the NDC to retain their 2020 presidential candidate.

“If he does not contest, I believe people won’t forgive him,” he added while explaining the turn of events when they visited the Bono East, Bono, Ahafo, Western North, and Ashanti regions last week.

“Where ever we went, we had some NPP members running to Mr. Mahama telling him they are disappointed in the Akufo-Addo government…Even in the Ashanti Region which is a stronghold of our opponents, the NPP, people encouraged us that 2024 is for the NDC,” he noted.

Ako Gunn also added that NDC members some few years ago could not wear NDC-branded T-shirts in public spaces without provoking people and admitted that the Ashantis are gradually swinging towards the NDC.

He cited the 2020 election results as evidence that the Ashantis were beginning to vote based on the results they get from governments.

Mr Mahama has so far visited the Upper East and West regions as well as the Savanna, North East, and the Northern regions.