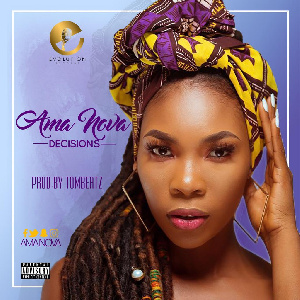 Ghanaian afrobeat songstress, Ama Nova, has revealed that she has a thing for men who are well built with abs.

According to the “Calibre” hitmaker, men who have abs represent strength and as such she always feels safe around them.

“I love a man who takes good care of himself,” she disclosed in an interview. “A man who is well built; a man with a six-pack to be precise. I love a six-pack man because he represents strength.”

The sassy singer was recently out of the country to embark on a press tour in South Africa.

“I was in South Africa for a radio tour. I also used the opportunity to shoot some music videos and to see the city,” she explained.

She continued: “The trip was a good one because I was able to introduce my music to those who had not heard of me yet and to build a new fan base. It was successful.”

Meanwhile, Ama Nova is out with the official visual for “Meara” – the second song off her latest EP, “Blue N Black.”

She said: “Meara is a beautiful song I wrote for lovers. It’s a typical story of how a woman feels butterflies in her stomach when her man proposes to her.”

“And as you can see in the visuals I was having fun, dancing around and painting my six-pack man, showing how most women act out of their heads when they are in love,” she described.

The colourful, striking visual was directed by Eddie Kay Mensah (Director Edd), and the song was produced by Skyboo Musik and, mixed and mastered by Tombeatz.

It’s difficult to stay in Nigeria, I like it in Ghana because it’s more organized – Hanks Anuku