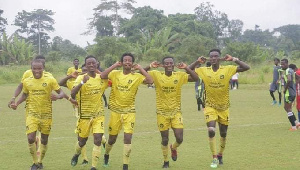 Koforidua Suhyen walloped Talons FC 7-2, in the last group A match in the ongoing Eastern Division Two Middle league to book a place in the finals.

The match which was played at the Mampong Park, saw Talons FC stumble throughout the 90 minutes as they couldn’t stand the heat from Koforidua Suhyen Sporting Club.

Great Warriors elsewhere at the Dawu Stadium couldn’t contain Fotobiman FC’s pressure in both the first and second halves of the game to concede 4 goals to 1.

It took the Warriors by surprise after conceding the first two goals which warmed them into the game.

After all the matches played today, the finals date as scheduled to be played on Sunday, September 19, 2021 will be put on hold, authorities will delve into the incident that abrupt yesterday’s clash between Kwaebibirem United and Okwawu United at Dawu Sports Stadium. New date for the finals will be communicated to the public.

Callum Hudson-Odoi linked with a move to Liverpool