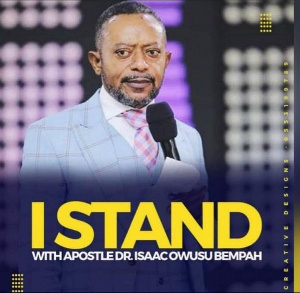 The embattled Rev. Owusu Ansah had a number of influential people push for his bail

• Rev. Owusu Bempah has been bailed

• Some NPP big names made attempts to get him out

Embattled preacher, Rev. Isaac Owusu Bempah, of the Glorious Word Power Ministries International, has been granted bail but there remains so much about the things that led to his court case, and all the characters who have played roles in it.

The ‘president’s pastor’ as he calls himself was arrested in his church on Sunday and put before court the following day. He was remanded for a week, after the Accra Circuit Court 4 refused him bail.

He later got that bail but that was not before he was sent to the Police Hospital in Accra for medical attention.

It was at the hospital, as mynewsgh.com reports, that several influential names within the New Patriotic Party (NPP), made some attempts to get him released.

The report by mynewsGh.com said their sources indicated that, “ Rev. Isaac Owusu Bempah was admitted to the Police Hospital Outpatient Unit and was examined by a doctor all without handcuff.”

In total, a number of prominent names from the NPP had their own influences in pushing for the clergyman to be released on bail, according to mynewsgh.com.

The others are John Boadu, the General Secretary of the NPP; Ama Busia, a founding member of the NPP and a sister of the late Kofi Abrefa Busia, former Ghana’s prime minister; Gary Nimako, a lawyer who was called on to help save the pastor; and a member of the NPP, Charles Owusu.

Water for all mantra is not mere slogan – Cecilia Dapaah