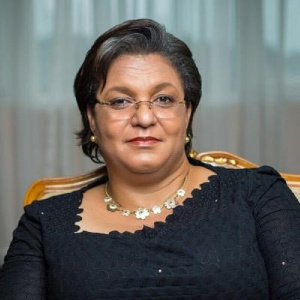 Hanna Tetteh, Head of the United Nations Office to the African Union

The Special Representative of the Secretary-General to the African Union and Head of the United Nations Office to the African Union, Hanna Tetteh has said for the African continent to develop to the fullest, women have to be recognized, represented and their needs, aspirations and protection adequately considered.

The former Minister of Foreign Affairs under the Mahama administration said the participation of women in politics and decision making is a necessity.

“Participation of women in politics & decision making is a necessity.

“Our continent won’t develop to its fullest extent if women aren’t recognized, represented & their needs, aspirations & protection are not adequately considered in the debates on policy development & legislation,” she said in a tweet.

A research done on women’s particpation in Ghana polictics and leadership in general published by Marie-Antoinette Sossou University of Kentucky, Lexington, USA, titled “We Do Not Enjoy Equal Political Rights: Ghanaian Women’s Perceptions on Political Participation in Ghana” said Ghana is one of the first countries in Africa to ratify a number of international human rights treaties and conventions for women’s rights and gender issues such as the 1979 Convention on the Elimination of All Forms of Discrimination Against Women (CEDAW).

Also, the 1992 constitution of the country enumerates certain fundamental human rights and freedoms for all people in the country. For example, Section 17, Subsections 1 and 2, and Section 27 of the constitution have a specific nondiscrimination provision that includes gender and women’s rights issues (Republic of Ghana, 1992). Despite these constitutional provisions and international treaties, customs and cultural practices continue to adversely affect the rights and lives of women in Ghana. According to the 2000 Ghana Living Standards Survey, Ghana has a total population of 18.4 million and 44.1% of women as compared with 21.1% of men have no formal education and therefore could not read or write.

Historically, women have been oppressed and dominated by the patriarchal society in Ghana. Since the attainment of independence in Ghana, women have increasingly moved into the paid labor force; however, women still lag behind men in all sectors. In most traditional Ghanaian communities, the inferior status of women was quite evident. Women were taught to accept their position through the socialization process, including their initiation rites.

They were taught to be obedient wives and to respect their elders. They were told that a man could marry more than one woman (Manu 1984; Nukunya, 1969; Oppong, 1973). The inferior position of women in traditional Ghanaian society was reinforced by a number of factors, including social practices, religious beliefs, and the practice of polygamy, child marriage, and widow inheritance. Many of these practices are still found today in some places in the country.

Concerning access to education, the 2000 Population and Housing Census in Ghana indicates that 54.3% of female aged 15 years and above have never been to school despite efforts being made to increase girls’ education in the country. Gender parity between girls and boys has almost been achieved at the preschool or early childhood education level. However, the gap begins to widen from the basic or primary school level to junior high and high school levels. For example, at the junior secondary school or junior high school level, the percentage of girls and boys were 44.9% and 55.1%, respectively, in 1999 and 2000 school years.

The gender gap still widens at both high school postsecondary levels, with female constituting only 33% at high schools and postsecondary institutions (Ghana Statistical Service, 2002). Despite the introduction of free compulsory and universal basic education policy (FCUBE) in 1994, girls’ enrolment in schools continues to be low, especially in the rural communities of the country. School taxes and indirect costs such as book user fees, school uniforms, and school supplies have made education costly, even though enrolment is free in the public schools.

First, politics is viewed by most men and women as the quintessential male sphere of action, one in which women are both unwelcome and ineffective.

Second, most politically active women are members of the elite group. Better educated and wealthier, these women often pursue a political agenda that reflects their class rather than their gender interests (House-Midamba, 1990).

Participation of women in politics & decision making is a necessity. Our continent won’t develop to its fullest extent if women aren’t recognized, represented & their needs, aspirations & protection are not adequately considered in the debates on policy development & legislation. https://t.co/9zFz36wIEa

Akufo-Addo to address the UN General Assembly on September 22

Girls less likely to use or own technological gadgets