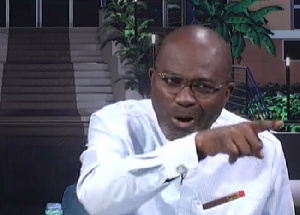 He indicated that some NPP leaders are the moles in the party as they give out information to the opposition National Democratic Congres (NDC).

“Most of the NPP leaders around Nana Addo are not genuine. They are the ones selling information to the NDC,” Mr Agyapong alleged.

Read the full story originally published on September 16, 2016 by ClassFM.

Nana Akufo-Addo has surrounded himself with moles who happen to be senior members of the New Patriotic Party (NPP), Assin Central MP, Kennedy Agyapong has said.

“Most of the NPP leaders around Nana Addo are not genuine. They are the ones selling information to the NDC,” Mr Agyapong alleged, saying the same people turn around to accuse the governing party of stealing the NPP’s manifesto ideas.

Mr Agyapong has, therefore, advised Nana Akufo-Addo to listen to people like him in the party since they have his best interest at heart.

“Don’t surround yourself with these people,” he cautioned the three-time flag bearer.

The maverick politician also accused the NDC of putting in place several strategies to rig the 7 December polls and, thus, advised the flag bearer of the NPP not to see the forthcoming elections as a doddle.

“… It’s not a done deal for you at all Nana [Akufo-Addo],” he said on Adom TV on Thursday, alleging: “They (NDC) have over 30 diabolic plans to win this election, so, no one should be fooled that it is a done deal for the NPP just by dint of the suffering Ghanaians are going through.”

Why OSP moved to the new GETFund building