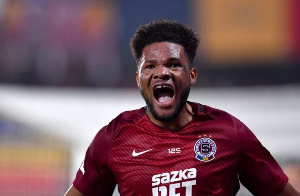 Ghanaian international, Benjamin Tetteh is likely to miss Yeni Malatyaspor’s encounter against Fatih Karagümrük later this evening due to an injury he is carrying.

The forward started the 2021/2022 Turkish Super Lig season very well but suffered an injury in the second game of the season.

Subsequently, he has gone on to miss two matches as a result of the injury setback.

Although he has made a lot of progress in the treatment room, Benjamin Tetteh has not fully recovered and hence will not be available for selection today when Yeni Malatyaspor hosts Fatih Karagümrük.

The two clubs are locking horns today in a matchday five encounter of the new Turkish Super Lig campaign.

With just six points after playing four matches, the hosts will hope to secure a win even without danger man Benjamin Tetteh at the end of the 90 minutes of today’s game.