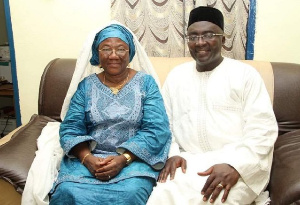 The vice-president with his late mom

The family of Vice President Alhaji Dr Mahamudu Bawumia has scheduled the final funeral rites for the late Hajia Mariama Bawumia to be held on Sunday, October 24.

The mother of the Vice President passed away peacefully on Monday, September 13 in Accra.

Her body was, then, taken to Walewale in the North-East Region, where she was buried on Tuesday, September 14 in accordance with Islamic customs.

Several dignitaries including religious and traditional leaders were in Walewale to mourn with the Vice President and his family.

On Thursday, September 16, the third-day adu’a prayers were held.

All 16 regional imams in Ghana were in Walewale to recite the entire chapters of the Holy Qur’an to seek the mercy and favours of Allah towards the departed Hajia Mariama.

Another round of recitation was done for the members of the family and all sympathisers who have been mourning with the family.

Here are all the vaccines received in Ghana since March