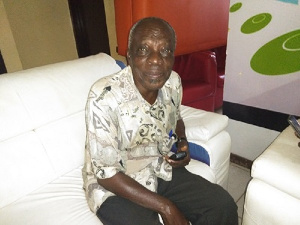 The late Kofi Laing popularly known as ‘Kohwe’ was an actor

• He was reported to have battled stroke prior to his demise

Social media was thrown into a state of mourning following the passing of veteran actor Kofi Laing popularly known as ‘Kohwe’.

News of the demise of the 75-year-old actor circulated on social media after he was reported to have suffered stroke a few weeks ago.

His daughter, Comfort Laing, who confirmed the news to the media said her father passed away at his residence in Accra on Thursday, September 16, 2021.

Following the reports, Ghanaians have taken to social media to pour out their condolences as well as recount some fond memories of him.

Some remembered him for his calm composure in the popular Akan Drama series.

It can be recalled that prior to Kohwe’s demise, pictures of him in an ailing state made rounds on social media.

The late actor is known for his sterling roles in the Akan Drama series and the popular ‘District Colonial Court.’

Read the reactions below:

I remember Kohwe during the days of Akan Drama. Always maintaining a calm composure even when angry????????. He paid his dues, unfortunately the system didn’t help him. MAY HE CONTINUE TO SLEEP WELL????????????????#Phobia110 https://t.co/XilTabyAW9

May God keep him. Rest In Peace Kohwe pic.twitter.com/ZGGOeslq3Y

Sad hearing of the demise of the man who in our childhood days used to lighten our faces???? with his diabolic language interpretation in the popular Tv Drama, District Colonial Court????.

R.I.P Kohwe, the role u played in the entertainment industry will never be forgotten???????????????? pic.twitter.com/PQ7L9yPkwL

The moment where everyone loves you have arrived once again.
Mother Ghana when will we learn to appreciate these people when they are alive.

Kohwe was a great Actor. A legend. Rest in Power