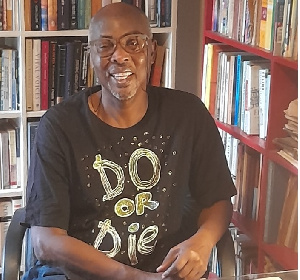 Harruna Attah is a veteran journalist and diplomat

Veteran journalist and politician Alhaji Harruna Attah is 69 today, 16 September 2021, and he did it in a surprise fashion by spotting a “do or die” t-shirt, endorsing John Dramani Mahama’s recent ‘idiomatic expression’ that has been met with mixed reactions.

In a birthday message to close friends and relatives, the former Ghana ambassador to Namibia said:

“69 is something of a do or die age. You have left the rounded milestone of 60, way behind, and the next one, the great three score and ten, 70, tantalizingly only 12 months away! You must get there. Hopefully we will all be around to welcome it. Cheers!!!”

The former president John Dramani Mahama has justified his use of the expression “do or die” for the 2024 elections in spite of a huge public uproar.

However, speaking on Sunyani-based Moonlite FM on Wednesday, the 2020 flagbearer of the National Democratic Congress (NDC) said he was taken out of context and would not retract his comment.

What Harruna Attah has said about ‘do-or-die’

“… They don’t understand do or die. Do or die is an English idiom. In Africa, we have many proverbs and we sometimes don’t say things in the straight format, we use proverbs. In English, we have idiomatic expressions. Those who left school early don’t understand idiomatic expressions. Do or die means a critical assignment you have and so you must do the needful or perish,” Mahama explained.

He added: “What I mean is that the NDC should not wait and go back to the Supreme Court, whatever has to be done at the polling stations and collation centres must be done. And so I don’t retract, the next election for NDC is going to be a do or die affair.

“I’m telling all our party executives that you must be at the polling station to make sure that the right thing is done. Don’t abdicate your responsibility at that level and expect that after somebody has stolen the election we’ll go to Supreme Court to see if they would turn the election for us, they won’t do it.”

His advice follows Tuesday’s comment by the former president John Mahama that the 2024 election will be a “do-or-die affair” at the polling stations.

Speaking to Accra-based Asaase Radio, Ephson said: “If you are a political party and you go and take a half-educated human being who has no link to your party and you tell the person I will give you GHS200 to be my polling station agent.

“You give him a GHS100 and tell him that at the end of the day, you will bring him an extra GHS100, at 2:30pm your opponent at the polling station gives him double what you promised him and they ask him to sign the pink sheet and leave before voting ends and he does it, why will you be crying?”

Meanwhile, security analyst, Muqtaru Mumuni Muqthar has charged the political parties to preach peace ahead of the election.