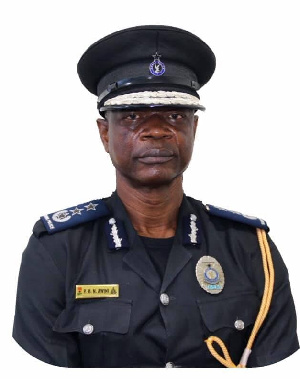 • He explained this in an interaction with journalist Manasseh Azure Awuni

In a country and on a continent where public servants rarely practice the tenets of their designation, it is hard to come across a public service worker who not only understands his duties but puts same in practice.

It’s different in the case of the Director-General in charge of Research, Planning and Transformation of the Ghana Police Service, Commissioner of Police (COP) Paul Manly Awuni.

The senior police officer has earned himself a good reputation in the eyes of the public who have constantly seen him stay in heavy traffic with his official car, while they see other public servants zoom through traffic with deafening sirens that automatically call for the road to be cleared for their coming.

Investigative journalist, Manasseh Azure Awuni has disclosed a recent conversation he had with COP Awuni which gives an insight into his admirable understanding of being a public servant.

“Early this year, someone made a Facebook post about a particular vehicle used by a senior police officer that always stayed in traffic like every other road user. It later emerged that the officer who used the vehicle was Commissioner of Police (COP) Mr. Paul Manly Awini, the Director-General in charge of Research, Planning and Transformation at the Ghana Police Service.

“Last week, I saw COP Awini and mentioned the post about him. To him, it is a normal behaviour of a public servant. This is what he told me:

“As a police officer, I am a public servant. I am not an English guru like you people, but with the help of the dictionary, I understand the meaning of a servant. My duty is to serve the public. That’s why I’m here. The vehicle I’m using has been bought by the public. The fuel in the vehicle is paid for by the public,” Manasseh shared COP Awuni’s words in a Facebook post.

According to the journalist, he again learnt from the senior police oficer how his humbling demeanour transcends beyond what the public sees on the road but goes into his daily interactions in his workplace.

“He told me that, as a rule, if any member of the public enters his office—whether young or old— he stands up to greet and offers them a seat before he resumes his seat,” Manasseh continued, whilst quoting COP Awuni.

Relating COP Awuni to the Inspector General Police, Dr. George Akufofo Dampare who is also known for staying in traffic even after he became IGP, Manasseh described the two senior police officers as redefining leadership in the country.

“I have seen similar posts about the Acting IGP, Dr. George Akuffo Dampare, who decides to stay in traffic like every other citizen of the land instead of going the way of some undisciplined politicians and other public “masters”, who shove off other road users with their fuel-guzzling Land Cruisers. Those who knew Dr. Dampare before he rose to the apex of the Police Service will attest that he’s not being populist. Like COP Awini, genuine humility and decency come to him naturally.”

“These fine police officers are redefining leadership, setting good examples and giving us hope that there are rays of hope in the darkness of our badly managed republic.

All hope is not lost in the Leaders’ Republic of Nyamebekyere,” he wrote.

#GhanaWebRoadSafety: Our roads are not growing to accommodate over 3m vehicles – Ing Osafo Adonteng

Law School failures: Ghana will not be deprived of lawyers – Law lecturer