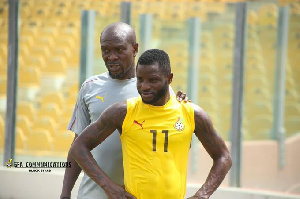 Black Stars midfielder, Mubarak Wakaso has said, he is confident Coach Charles Akonnor will succeed in his next endeavors after the Ghana Football Association (GFA) terminated his contract with the Senior National team.

Coach Akonnor and his two assistants were fired as coaches of the Black Stars on Monday, September 13, following the team’s shambolic performance in the first two matches of the 2022 FIFA Qatar World Cup.

Ghana struggled to win by a lone goal against Ethiopia at home and travelled to lose against South Africa in a 1-0 scoreline.

Wakaso, who plays for Chinese club Shenzhen F.C. took to his social media page to wish Akonnor success and thanked him for the immense support he gave him in his career.

The 31-year old said, “Coach C.K. Akonnor, when I was a little boy in Tamale I watched you play football.

“Later, I became a ball boy/ player for Gold Fields where you played. You became my coach at the Black Stars.

“Thank you for everything and best of luck in your next job. I know you will succeed.”

The GFA is expected to name a Black Stars coach on Thursday, September 16 to lead Ghana to the 2022 Africa Cup of Nations in Cameroon and the remaining World Cup qualifying matches.

Emmanuel Sarkodie blames injuries for his struggles at Asante Kotoko