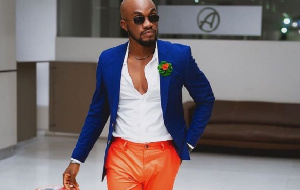 Award-winning afrobeat artiste, Mr. Drew has disclosed that until recently he has been chasing KiDi for a feature.

Stating his reasons for featuring KiDi on his ‘Shuperu’ song, Mr. Drew who is currently promoting his Alpha album stated in an interview with Kastle FM that;

“I’ve always wanted to put KiDi on my song so I have already sent him multiple songs for him to do a collabo with me. But sometimes due to his busy schedules, he’s been unable to do it but this is the final one that he had time to put his verse on it.”

“Sincerely I have always wanted to put him on a song so actually it’s a blessing that he finally decided to do shuperu with me,” he revealed on the show,” he added.

It can be recalled that Mr. Drew recently refuted clams of stealing some lyrics from Nigeria’s Fireboy to create his ‘Shuperu’ song.

Speaking in an earlier interview with SammyKay, the Highly Spiritual artiste, disclosed that the song has been on his album months ago before the song “Peru” by Nigeria’s Fireboy came out.