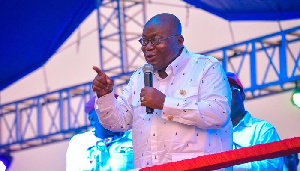 A communication team member of the opposition National Democratic Congress (NDC), Uncle George, has opined that just as CK Akonnor has been sacked as a coach for the senior national team, President Nana Addo Dankwa Akufo-Addo and the New Patriotic Party (NPP), would be removed from office in 2024.

Appearing on Frontline on Rainbow Radio 87.5Fm, he said the current NPP government has performed abysmally and must be shown the exit just as CK Akonnor was shown the exit by the Ghana Football Association.

According to him, no adjective could describe the abysmal performance of President Akufo-Addo and his Vice President Dr. Mahamudu Bawumia, who is currently known as a ”liar”.

He reiterated former President John Dramani Mahama’s assessment of President Akufo-Addo saying the president has mismanaged the economy and blaming Covid-19 for his poor performance.

To him, the NPP must be shown the exit in 2024, or Ghanaians would regret keeping them in office for another four years.

He said the claims by Mr. Mahama that the incumbent government has stolen from the Ghanaian taxpayer is a fact that must not be debated.

He added that there should be a change in government; a vote for the National Democratic Congress (NDC) to ensure the NPP account for their mismanagement and corruption.

Ghana’s Ambassador to Italy has died

Insurance companies must do risk assessment for drivers – Kofi Akpaloo