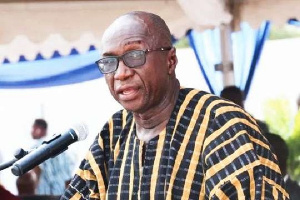 Minister of the Interior, Ambrose Dery

The Minister of the Interior, Ambrose Dery, has appealed to planning authorities including Metropolitan, Municipal and District Assemblies (MMDAs) to prioritise access routes for service providers during planning of residential and commercial facilities.

Referencing a fire outbreak incident in Accra in 2018 which ravaged a commercial building, he said, personnel of the Ghana National Fire Service (GNFS) got to the scene on time, but were delayed in fighting the fire due to the lack of access to the affected facility.

He, therefore, charged the newly inaugurated Governing Council of the GNFS to foster collaboration between the Service and planning authorities to address the challenge.

The Minister made these remarks yesterday when he inaugurated the Council, chaired by Kwame Ayimadu-Antwi, Member of Parliament (MP) of Asante-Akim Central Constituency, yesterday in Accra.

The rest are Assistant Chief Fire Officer (ACFO) Mark Brako-Appiah, representing the Senior Officers of GNFS, GO1 Faustina Ayereke, representing junior officers and Emmanuel Agyei Anhwere and Florence Pul, who are both nominees of the President.

Acknowledging the GNFS’s operational challenges due to inadequate equipment, he said, inaccessibility was mostly responsible for high rate of losses during fire outbreaks.

Mr Dery stated that government was working to procure some equipment including fire tenders to enable the Service deliver on its mandate saying that “it is the commitment of government to retool all security agencies under the Ministry to make them effective.”

He asked the Council to work to make an impact on the performance of the GNFS and “be proactive and not reactive.”

The Ministry, he said, was committed to working together with the Council to address all impediments in the operations of GNFS.

Mr Ayimadu-Antwi, on behalf of the other members, thanked the government for the appointment and pledged to work closely to uplift the image of GNFS.

He noted that the Council would pursue policies that would ensure protection of lives and property as required of the Service.

Ghana is a peaceful nation today because of Mahama – Ofosu-Ampofo