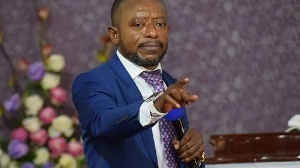 • Gideon Boako’s claim that Dr. Bawumia has no hand in Owusu Bempah’s arrest has been challenged by Sammy Gyamfi

Despite efforts by Dr. Gideon Boako, the aide to Vice President Dr. Mahamudu Bawumia to dispel assertions that the vice president had a hand in the arrest of Reverend Isaac Owusu Bempah of the Glorious Word Power Ministries, Sammy Gyamfi, the National Communications Officer of the National Democratic insists that the man of God is being victimized by the government for picking Trade Minister Alan Kyerematen over Bawumia.

Gideon Boako intimates that Dr. Bawumia cannot be mentioned in the case as he shares a great relationship with Reverend Owusu Bempah.

He argues that the vice president is too ‘humble and gentle’ to treat his rivals badly talk less of someone he has a good relationship with.

“What I want people to understand is that even if Dr Bawumia had no relationship or whatever with Reverend Owusu Bempah what would have been the cause for him to influence the police to arrest Reverend Owusu Bempah? We all know Dr. Bawumia is a humble man who wouldn’t do such a thing.

“Even when his mother died, he still showed kindness to the actor TT. That is the vice president for you. We shouldn’t use politics to denigrate such a humble man. We have a very good relationship with him. What the NDC and Sammy Gyamfi are doing is not helping Reverend Owusu Bempah,”, he said.

But Sammy Gyamfi maintains that Reverend Owusu Bempah’s recent troubles are due to his decision to pitch camp with the Alan Kyerematen faction of the New Patriotic Party.

“He also said that it’s the police is enforcing the law so we should leave them, when Owusu Bempah made those allegations against John Mahama and attacked Mugabe, were there not police officers in the country. He is being persecuted because he prophesied against Bawumia,” he said on Okay FM.

He was however granted bail on Wednesday, September 15, 2021