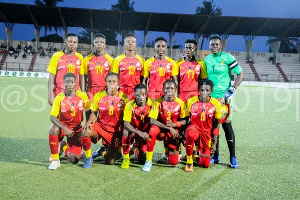 Coach Mercy Tagoe-Quarcoo’s charges, the Black Queens were humiliated by 3-0 against South Africa in Ghana’s first Group A match in the Aisha Buhari Invitational tourney ongoing in Nigeria.

South Africa broke the virginity of the match in the 18th minute when Kgatlana’s one-on-one chance against goalkeeper, Fafali Dumehasi hit the crossbar for Magaia, who was lurking around to head the ball into the back of the net.

After the first goal, Ghana was handed an opportunity through Grace Asantewaa to pull parity but South African’s goalie, Swart Kaylin was on spot to deny Ghana the equalizer.

From recess, former African Footballer of the Year, Kgatlana South Africa gave South Africa the second goal with Holweni increased the tally in the 83rd minute with a free header from Rafiloe Jane’s corner kick.

Ghana would face Cameroon on Sunday, September 19 before taking on Nigeria.

Post us or we protest – Unposted trained teachers to govt