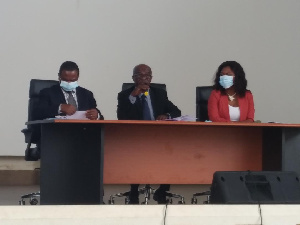 play videoMembers of the Ministerial Committee during one of their sittings

TV3 has learned from credible sources that the Justice Koomson’s Committee report on the Ejura shooting incident has among other things recommended compensations for persons and families who in one way the other have been affected.

The committee is said to have also recommended an upgrade of the health facility in Ejura for it to be able to take care of the critical health needs of the people.

The report, which the Information Minister, Kojo Oppong-Nkrumah, has assured will be out by close of week, is also said to have a recommendation on the need to have a clear standard operating procedure for the deployment of security forces in crowd control and other operations.

Again, the sources say, the committee has also recommended that employment opportunities and recreational centres be established in Ejura to help engage the youth.

The Municipal Chief Executive (MCE), the sources say, the committee recommended his removal from office.

Roland Walker has more on some of the recommendations gleaned from the report as gathered from reliable sources.

‘I don’t speak big English, my kind of ‘brofo’ is what I speak’ – Hawa Koomson