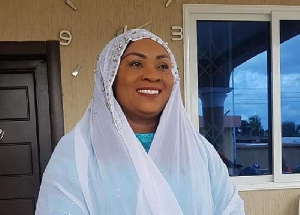 • Hawa Koomson has tasted both Islamic and Christian faiths

• She was born to a Muslim family but married a Christian

• She reveals how one-night prayer caused her to switch religions

For twenty-three years she practiced Islam having been born to Muslim parents, but today she is a dedicated member of the Christian flock, specifically the Methodist faith.

Fisheries Minister, Mavis Hawa Koomson has recounted how a night of prayer with her Christian husband changed her religious leaning from being a staunch Muslim to a Christian.

She shared her journey to Christianity when she appeared on the September 16 edition of Metro TV’s Good Evening Ghana programme.

“I am a Christian but my parents are Muslims. (I ended up as a Christian) because of my marital status,” she told host Paul Adom-Otchere, adding that she was a strong Muslim for 23 years adhering to all dictates of the faith.

Asked why she reverted, she responded: “That is what I wanted for myself and I also think it is the woman that joins the husband not the other way round, so that is how I interpreted it”

She admitted how hard it was initially when she announced her decision: “It wasn’t easy for me actually because my family didn’t understand why a strong Muslim woman should marry a Christian and even move into Christianity.

She then told the story of how a midnight prayer after her first child acted as the main catalyst for her decision to switch the mosque for the church.

“Marrying a Christian wasn’t a problem because the conclusion was that I was going to remain as a Muslim woman and he will remain in his Christianity, but when I gave birth to my firstborn, I had a terrible dream,” she recounted.

When she woke up, she called her husband and they had a Christian prayer and the problem was later solved so she joined him for that Sunday’s service and ever since then has held on to her faith.

She disclosed that her husband who is a civil servant was a Methodist, “so I joined the Methodist and since then, I have been a Methodist.”