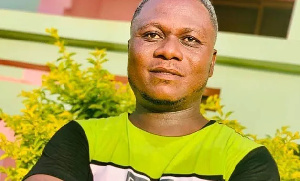 Popular Ghanaian moviemaker, Frank Fiifi Gharbin has expressed shock at the revelation he has received concerning his current predicament.

In an earlier video making rounds on social media, Frank Gharbin who seemingly cannot move his legs was seen in the company of two men who carried him into a waiting vehicle.

This was after reports that Mr. Gharbin’s predicament was caused by a spiritual attack.

Speaking on Happy FM’s Ayekoo After Drive Show with host, Doctar Cann, the film director expressed that he was very shocked to hear from the herbalist that his condition is spiritual and not just a normal leg illness.

“When Jackson and Baba came to look at my condition, they said it does not look like something that can be treated by a hospital and that one actor called Longface found himself in a similar predicament and was helped by a spiritual and herbal doctor called Dr. Koduah do I should reach out to him,” he said

“I was very shocked to hear that because I’m someone who doesn’t really entertain these things but then in this industry, people can hate you for the slightest of reasons. Also, since the initiation of the Kumawood awards, I have received awards twice in a row and no one has been able to do that,” he added.

Having too much money is boring, I miss being broke – Medikal