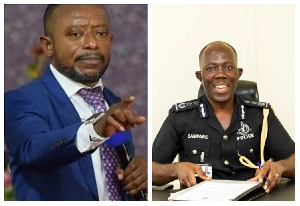 • An aide to Bempah says Dampare is ‘fighting’ the Reverend because of the late Joshua T.B

Charles Owusu, an aide to Reverend Isaac Owusu Bempah, has alleged that the harsh experiences that the embattled preacher received while in police detention was because of previous pronouncements he made about another clergyman.

The aide whiles recounting the treatment meted to Owusu Bempah at the Police Hospital in Accra earlier this week said, “the IGP made up his mind to settle personal scores that he has with Owusu Bempah, so he will deal with him.

When pushed whether he could prove the allegation, he stated that he was privy to a phone call where Dampare said he will ensure that the right is done in respect of the Owusu Bempah issue.

“I personally listened in to a phone call where the IGP said he will not grant him (Owusu Bempah) bail and that he will let the law take its course. That he is using Owusu Bempah to set an example in the country,” Charles Owusu alleged.

According to his narration, his spiritual father was rushed to the Police Hospital after he showed signs of sickness. That at the hospital, a policeman arrived and handcuffed the bedridden Owusu Bempah stating that his instruction was because of orders from above.

Owusu continued that after a phone call was made, the handcuffs were removed before an extra seven armed policemen were deployed to the ward again and then shortly another order from above asked that the visibly ailing Owusu Bempah be returned to Cantonments Police cells when he had barely received half a drip out of three that was ordered initially.

Owusu Bempah was arrested a week ago at his church premises over an incident where he threatened a former fetish priestess, Nana Agradaa.

Viral videos showed Owusu Bempah in a car with some aides bearing guns in front of the residence of Agradaa. Bempah along with three junior pastors are facing charges relating to threat to harm and threat of death.

He was refused bail by a Circuit Court on Monday before his lawyers proceeded to the High Court where he was granted a 200,000 Ghana cedis bail.

Speaking on Neat FM, Owusu Bempah confessed to having encountered TB Joshua once on phone.

“I never met him in person but I remember an issue happened in the past. He had a program in Ghana and my name was captured as one of the preachers. I had an interview with another radio station and I told them I was unaware of the program.

“The things I said did not go down well TB Joshua’s pastors who came out and attacked me which led to a banter on radio. I told them that four people were going to die at the program and it happened.

“Some time after the program, A Plus and some influential man came to my house. The message was that TB Joshua wanted to speak with me so we spoke on phone. He said that he has seen the good works I was doing and wanted to visit me.

“I didn’t speak with him again. He asked me to give him time but I couldn’t get him the time. I promised to get back to him on the day he can visit but I couldn’t do it and that was the last time I heard from him,” he said.