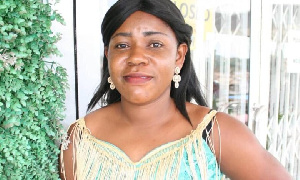 • The police has confirmed that Josephine Simons has been kidnapped

• She went missing after her regular morning walk on Thursday

The Ghana Police Service in Takoradi have confirmed that, one Josephine Simons, who is nine months pregnant, has been kidnapped.

Josephine, 28, went missing on Thursday, September 16, 2021, when she went out for her usual morning walk.

Detective Superintendent of Police (DSP), Olivia Ewurabena Adeku, the police regional spokesperson told Asaase radio in an interview monitored by GhanaWeb that, the police officers are still investigating the whereabouts of the 28-year-old woman after receiving a complaint from her husband, Michael Simons.

Simons, according to Asaase report, told the police that, the alleged kidnappers of his wife established contact with the family and demanded a ransom.

“They called and gave the phone to her to talk to her mother to make some demands.

“We wanted to know what they want, but we’ve lost contact since then. So, we’ve informed the police about it,” he narrated.

DSP Adeku, however, stated that, the police will follow the leads which could help them discover the whereabouts of the pregnant woman.