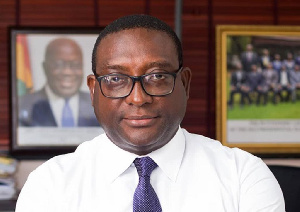 The Director of Communications of the New Patriotic Party (NPP) Yaw Boaben Asamoa has asked all Ghanaians to accept the final list of Metropolitan, Municipal and District Chief Executives (MMDCEs), that will be released.

He indicated that the list will be released on Monday September 20 although he believed it could have been done earlier than that.

Speaking on the Key Points on TV3/3FM with host Dzifa Bampoh on Saturday September 18, the former lawmaker for Adentan could not authenticate the list circulating in a section of the Ghanaian media but only said the final list will be released by the President on Monday.

President Nana Addo Dankwa Akufo-Addo has finalised the list of metropolitan, municipal and district chief executives (MMDCEs) to be nominated to serve in the next three-and-a-half years.

These were disclosed by the Director of Communications at the Jubilee House, Eugene Arhin.

“Expect the list to be announced by the Minister very soon,” he wrote on his official Facebook page on Wednesday, September 15.

Delay in nominating chief executives for the various metropolitan, municipal and district assemblies (MMDAs) has been a matter of concern to many groups and individuals.

In July, the Chamber of Local Government (ChaLoG) accused President Akufo-Addo of employing “unnecessary” and “unproductive” processes in nominating MMDCEs.

“ChaLoG wishes to call on the President to urgently come to terms with the negative impact his actions and inactions which has led to the delay in nominating MMDCEs to be confirmed by the Hon Assembly Members, is having on the smooth administration of the MMDAs,” it said in a press release on Sunday, July 25.

The President had issued a directive through the Chief of Staff, Frema Osei Opare, for MMDCEs from his first term to continue acting in office.

This issue was dragged to court by Member of Parliament for South Dayi Constituency Rockson-Nelson Dafeamekpor.

ChaLoG felt that directive has hampered progress in the local assemblies.

“As a result of this directive, all the MMDAs across the country have not undertaken any new projects even though they continue to collect Property Rates, Business Operating Permits, Markets and Lorry Tolls from rate payers, yet no capital projects are being undertaken by the Assemblies seven months into the year 2021.”