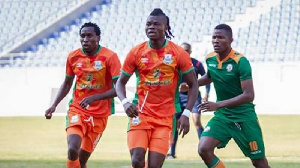 Rahim Osumanu with his teammate and opponent

Despite being reduced to ten men, defending champions Gokulam Kerala FC (GKFC) fought on to defeat Hyderabad FC 1-0 in Group D of the 130th Durand Cup on Thursday at Kalyani stadium.

Gokulam began the proceedings with a strong sense of purpose. They played an offensive approach from the start and generated several scoring chances.

GKFC had the first significant chance early in the first half when Rahim Osumanu got the ball directly in front of the Hyderabad FC goal but couldn’t send it past goalie Lalbiakhlua Jongte.

Gokulam started up where they left off in the second half and made an immediate impact. Jongte made a fantastic save, but Osumanu got the rebound. He made no mistake, breaking the deadlock in the 46th minute.