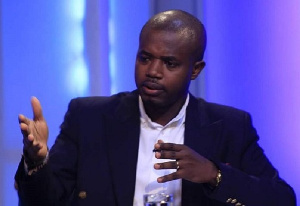 Lawyer and Member of the National Democratic Congress’ (NDC) Communication team, Edudzi Tamakloe wonders why Kwabena Duffour wants to contest John Dramani Mahama in the flagbearership race when he has not contested or run for any public office in his life.

According to him, Kwabena Duffour has no record to defend and campaign with but that of John Dramani Mahama.

To him, it’s needless that Duffour goes ahead with his decision to contest because if the NDC chooses him as its flagbearer, he will campaign on Mahama’s record and since John Dramani Mahama is alive, he is the best person to campaign on his records.

“Assuming NDC vote for Kwabena Duffour as the party’s flagbearer, when he goes for the campaign he will be campaigning based on John Dramani Mahama’s record. He will base his campaign on what Mahama did while President. So if the person who has done the thing is there, why would you want someone else to come and campaign on it?”

Defending why there is the need for the former President of Ghana John Dramani Mahama to contest for 2024 elections, Edudzi Tamakloe indicated that the gains made by the former President in the 2020 election is testament to his likability and urge over all other candidates.

“Even in opposition Mahama was able to garner 6.2 million votes then you say you are bringing someone who has never contested in any election in his life to come and contest for Presidency. Dr Duffour is like my father and I don’t have any capacity to advise him but I know he will resist any temptation from anybody regardless of his misgivings of whatever.”

Barring any unforeseen circumstances, Dr Kwabena Duffour is said to be lacing his boots to contest for the flagbearership of the opposition NDC.

Duffour has for some time now commenting on National Issues and in a recent post could not fathom why the former President of Ghana John Dramani Mahama will use “ado or die” which sparks violence.

Some old and relegated executives of the largest opposition party in Ghana believe the party needs a new face for the 2024 election because John Dramani Mahama will make the chances of the NDC bleak.

Yaw Boateng Gyan who was a former Organizer for the NDC believes the party needs a new leader who uses his brains to reorganize and capture power.

“At this point in time in the NDC… we need someone who can sit down and be able to use his brain and use the youngsters around him to run an errand for him. They should stop playing the age card in politics because it will not help us. If Dr Duffuor opens his mouth to say he will contest, I will be the first person to support him…” he said.

“We need a leader who can sit down and think of good governance and proper politics. Governance is not about running a race and playing football” he jabbed.

Akufo-Addo was just being playful with Aflao chief – Buaben Asamoa

‘He is a tyrant’ – NDC organizer drags Wontumi over Kumawu confusion