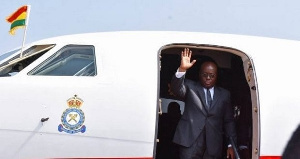 • The edifice when completed, is expected to generate revenue and international tourism traffic

President Akufo-Addo is expected to attend a fund-raising event for the National Cathedral Project in the United States of America, the Presidency has revealed.

“On 23rd September, the President will attend a fundraising event for the National Cathedral.”

This was disclosed in a release by the Presidency to announce President Nana Addo Dankwa Akufo-Addo’s departure on Friday September 17, 2021, to attend the 76th Session of the United Nations General Assembly in New York, USA.

The construction of the Cathedral is estimated to cost about US$200 million after an initial cost of US$100 million was earmarked for the project. The cost shot up due to some extensions added to the existing plan of the project.

The national cathedral project is expected to generate US$83 million in economic tourism revenue within the first three to five years of completion, according to Dr. Paul Opoku-Mensah, chief executive of the project’s secretariat.

Despite varied opinions over the construction of the National Cathedral, the Akufo-Addo government has intentioned to move ahead with plans to complete the edifice with the premise of generating revenue and international tourism traffic.

Already, government has made a passionate appeal on citizens to donate 100-cedis-a-month in a bid to mobilise support for the cause.

The building of the Cathedral which is expected to be completed by March 2024 is in fulfilment of a pledge made by President Akufo-Addo in 2016. It is expected to feature banquet halls, bible museums and other mutli-purpose facilities.

Meanwhile, President Akufo-Addo will on September 22, 2021 address the UN General Assembly. He will also participate in the Global COVID-19 Summit hosted by U.S President Joe Biden, and hold several rounds of engagements and UN events on climate change, health and food security.

It added, “The President will also participate in the Second Sustainable Development Goals Moment of the Decade of Action, and witness the Signing Ceremony between Minister for Tourism, Ibrahim Awal Mohammed, and Developers of the Dubois Project.”

During the trip, President Akufo-Addo is expected to hold engagements with sections of Ghanaians and the business community in the USA.

Vice President, Dr Mahamudu Bawumia in accordance with Article 60 (8) of the Constitution shall act in his stead until the President’s return.