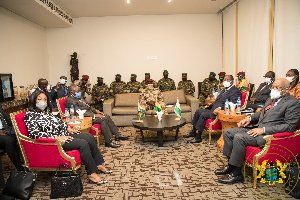 President Nana Addo Dankwa Akufo-Addo led the delegation as the ECOWAS Chairperson together with Alassane Ouattara, President of La Côte d’Ivoire and the duo held talks with Colonel Doumbouya and his men on Friday, September 17.

Some pictures of the meeting were posted on President Akufo-Addo’s official Facebook page. It showed that aside from the two President’s there were other officials from Ghana who were part of the delegation.
Seated among those on the front row was Shirley Ayorkor Botchway, the Foreign Affair Minister.

In a post which has since been deleted, the journalist wrote:

“I’ve asked Eugene Arhine, the Presidential Director of Communications, what EC Chair, Mrs Jean Adukwei Mensa (seated first on the left row), was doing during the ECOWAS meeting with the Guinea military junta earlier today. Yet to get an answer…”

Minutes after his post, he was prompted that the supposed Jean Mensah in the picture he attached to his post was the Foreign Affairs Minister.

Ogbamey subsequently deleted the post that sought to malign the EC Chairperson. 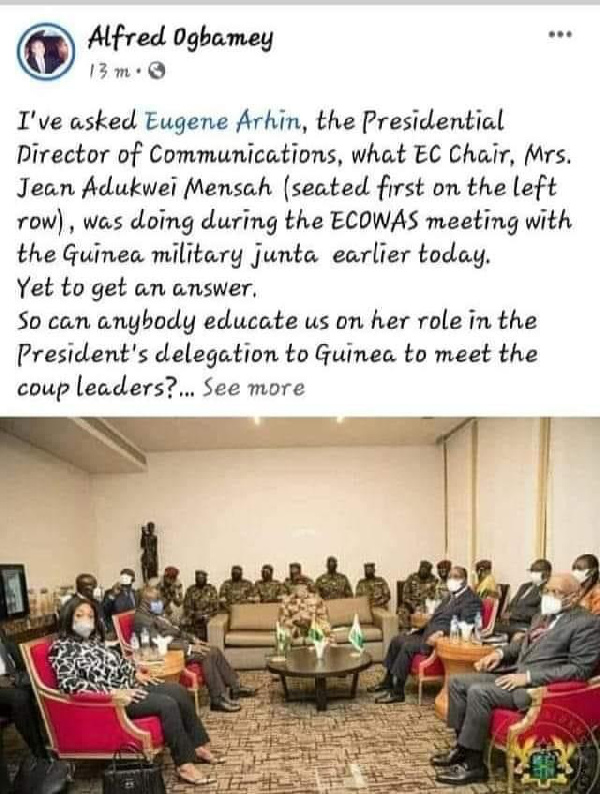 ILO partners GFL to promote the welfare of Ghanaian workers

Unemployment is a probable cause of ‘insecurity’ – Kofi Akpaloo