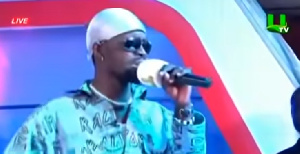 • The United Showbiz panel were moved by Black Sherif’s act

Arnold and Abeiku Santana gazed at Black Sherif the whole time during his performance while soaking the lyrics and their eyes got teary at a point.

The fast-rising Ghanaian artiste delivered a soul-touching performance with his ‘Ankonam’ song which plunged the entire panel into a tensed one.

‘Ankonam’ captures the struggling life of the ghetto youth and how they are deprived of opportunities.