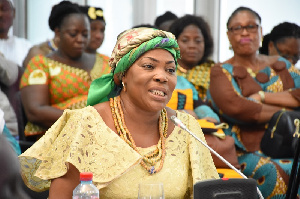 A former Member of Parliament for Okaikwei North has been nominated as the new Metropolitan Chief Executive for Greater Accra.

Elizabeth Sackey will replace Mohammed Adjei Sowah as Mayor of Accra if approved.

Before the announcement of her nomination as the Mayor for Accra, some members of the New Patriotic Party took the streets of Jamestown to protest following the hint that Mohammed Sowah would be replaced.

The protesters allegedly blocked roads at Jamestown and burnt car tyres, creating a sense of fear and disorder.

Four individuals described as ringleaders have so far been arrested while the police have cautioned groups who intend to demonstrate against the list to abort such plans or face the law.

Meanwhile, Samuel Pyne has also be nominated as the Metropolitan Chief executive for Kumasi.

When approved, he will take over from Osei Assibey-Antwi.

Below is the full list of the MMDCE nominees:

Suhuyini questions the motives of activists against the anti-LGBTQ+ bill