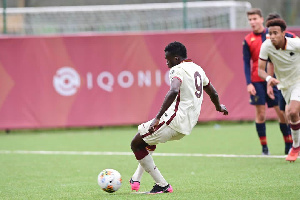 Striker, Felix Afena-Gyan, scored in successive matches to help AS Roma draw 2-2 with AC Milan in the Italian Primavera on Saturday, 18 September 2021.

The 18-year-old was released on the right side by a threaded ball from Satriano and the gangly forward sprinted like a hare to enter the box before dummying a defender and the goalkeeper to score the opening goal.

It was his second league goal in three matches for the leaders.

AC Milan equalized in the 13th-minute courtesy of Di Gesù’s brilliance who kicked a left-footed shot from the edge of the area into the top corner.

But after one minute, the Giallorossi regained their lead thanks to Oliveras.

Andrea Coubis then drew the Rossoneri level in the 24th minute after Morichelli had fouled Traoré inside the box for a penalty.