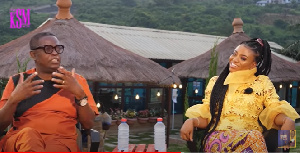 play videoKwesi Pratt and daughter Ama on the KSM show

Veteran journalist and Managing Editor of the Insight newspaper, Kwesi Pratt Jnr, has averred that he finds it difficult to appreciate how some feminists have issues with other women cooking.

Pratt says he wished that no woman in his house will cook and that the responsibility will be left to him because he loved cooking and saw nothing wrong in principle with someone dedicating themselves to doing it.

In an August 2021 interview with Kweku Sintim Misa on the KSM show, Pratt stressed that he saw cooking as an art and had grown to learn how to cook out of necessity.

“One of the things I have never understood is the gender or feminist movement when they complain that women cook. I love to cook (and) I wish that no woman in my house will cook, that they will leave all the cooking to me because cooking is an art.

“To start with all of my life, we had only two sisters and they were much younger. So all along, it was my elder brother and I… so we had to cook for ourselves, there were no women in the house, we were all boys. So we cooked but I began enjoying cooking from a very early age and I used to cook many things,” he said.

He also boasted about how his friends will insist that he prepares his type of jollof because of how different it was. “I used to have friends who said “you have to cook jollof for us,” and I will cook the jollof because my jollof is different.

“I cook jollof with red beans and meat cut into small small pieces and when my friends eat it, they always want to have some more later… cooking is one of the most beautiful things you can do,” he added.

Pratt was on the show with his daughter, Ama Pratt who is CEO of Obaasima Foundation and Managing Director of Pan African television.

The two shared intimate details on their relationship whiles Pratt spoke about his many experiences as a journalist from the military era through to the 1992 democratic dispensation and beyond.

Akufo-Addo is mortgaging everything in Ghana – Mahama