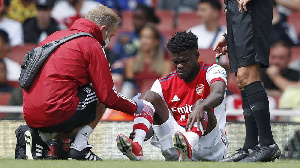 Arsenal is sweating on the fitness of Thomas Partey after the midfielder was subbed off in Saturday’s 1-0 win at Burnley in the English Premier League.

The Ghanaian player was in fine form for 75 minutes before he was seen signaling to the bench that he needed to come off due to a muscle problem.

Partey was later replaced by Ainsley Maitland-Niles at Turf Moor.

“He struggled at the end. He was cramping but that will come because he’s missed a long time. He needs some fitness back,” Arsenal manager Mikel Arteta said.

Partey was making only his first start of the season following rehab from an ankle injury during pre-season.

He returned to first-team action last week against Norwich and played a part in Pierre-Emerick Aubameyang’s decisive winner.