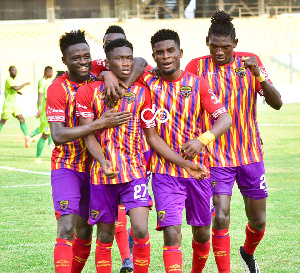 Hello good afternoon and welcome to our live text coverage of the CAF Champions League game between Accra Hearts of Oak and CL Kamsar of Guinea.

The one-off game which comes off at 3 pm at the Accra Sports stadium is crucial to the chances of both teams qualifying for the next stage of the competition.

Hearts are making a return to the Champions League for the first time in about a decade after winning the domestic double in the recently ended Ghana football season.

They enter this game high on confidence but must play well to overcome their opponents.

Hearts of Oak’s opponents, CI Kamsar are powerhouses in Guinea and had some experience in continental battles, playing in the CAF Confederation Cup last season.

The two teams were set to play the first leg in Guinea but a coup d’etat forced CAF to make the game a one-legged tie.

If the game ends in a draw, we will move straight to penalties to decide the winner.

Follow the live update of the game in the link below.