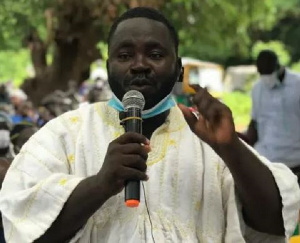 Abdulai Habib Abiola, One of the finalists in the MMDCEs race for the East Gonja Municipal Assembly

One of the finalists in the Municipal Chief Executive race for the East Gonja Municipal Assembly, Abdulai Habib Abiola, has called on his teeming supporters to remain calm ahead of the announcement of the MMDCEs later today by the Local Government Minister.

Speaking exclusively to 3news.com, Mr. Abiola said as a finalist in the vetting committee’s recommendation to the President, he will accept and work with whoever Nana Addo Dankwa Akufo-Addo settles on to represent him in the municipality.

“The president knows best who can best represent him and bring to fruition the development of the municipality while raising the NPP flag high and I will gladly accept and work with whoever is giving the mandate.”

He added, “I implore all my supporters to accept the president’s nominee.”

He is optimistic his turn will come one day if he is not considered this time.

Mr. Abiola is the current secretary of the ruling New Patriotic Party in the Salaga South Constituency, a position he says he serves with passion.

However, information gathered indicates the president is likely to maintain the incumbent MCE, Mohammed Tamimu.

The announcement is slated to take place at a press conference Sunday at 1pm.

We are keen on creating an enabling financial, inclusive environment for PwDs – BoG